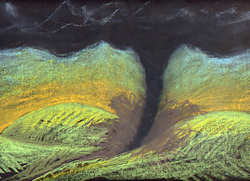 The Storm Within by LJAmlie
What if the alternating between manic episodes & depressive episodes experienced with BiPolar Disorder (called Manic-Depressive Disorder in the past) happens because there is this tremendous creative force that has been subjected to intense & consistent repressive conditioning since the earliest days of self expression began. Over time the pressure builds & then some catalyst causes it to be released in the tremendous outpouring of creativity, but it is often delusional & unsustainable because it has been distorted by the extreme pressure of the containment. Then often without the support & witnessing from the world the conflicting beliefs of societal, familial & religious conditioning cause the person to quickly doubt oneself & go into the throws of a deep depression. Then the cycle repeats itself. I suspect the organism can only withstand these extreme vacillations for so long before something breaks down. Either there is some opportunity for truer sustained expression to be realized (which I don't think was common in the last two millennia or so) or the mind suffers a break with reality. So how do we offer a different option? Is there a way to create an environment where there can be some sort of consistent expression & authentication of these inner creative compulsions?

From a nervous system perspective it is perfectly natural for the system to vacillate between the activation of the Fight or Flight Sympathetic nervous system in the states of mania & then flip into the Parasympathetic Helplessness or Freeze function when the endeavor attempted in the manic state is not supported or realized, thus resulting in the depressive cycle. But psychology just perceives this as resulting from the events of early life or trauma or genetics. But from a metaphysical or spiritual perspective it is highly likely that these individuals have come into this life with a 'stronger charge' so to say. What if they have an inner compulsion to accomplish something that remains under the surface of their consciousness, something that the egoic mind keeps trying to force fit into a publicly approved package. It would then be likely that the person continually attempts projects & endeavors that do not 'fit' the Soul's inner impulse. This would then create an inner conflict which causes tremendous pressure to build that gets 'leaked out' in strange behaviors like talking to oneself, rocking side to side or front to back, and erratic mood swings.

If in fact this is the case, what would really assist the person in moving through this? I suspect that having a safe environment & some creative outlet appropriate for the individual, along with understanding & support, there would be a way for this 'inner message' to come through therefore alleviating the pressure & fulfilling this sense of inner purpose at the same time. Perhaps this would open opportunities to live life differently than before by honoring the inner urges as Soul messages rather than pathological delusions. Just a thought, but something I'm chewing on right now. I would love any personal experiences or insights that come from direct experience.