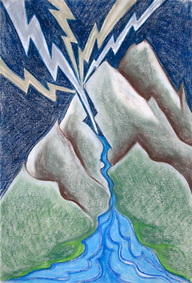 Catalyst by LJAmlie
THE AUTONOMIC NERVOUS SYSTEM IN A THREATENING SITUATION
The human’s ability to respond to his/her environment is predominantly determined by the Autonomic Nervous System (ANS). It basically has three aspects: the Social/Engagement Nervous System, the Sympathetic NS & the Parasympathetic NS.

If all systems are operational the Social/Engagement Nervous System is functioning and you are able to interact with other people in a clear, calm way & make decisions. This is like a green light & the rest of the body & autonomic nervous system (i.e., automatic NS, controlling the heart, breathing, digestion, organs, etc.) follows suit & functions normally.  However, in the presence of any real or perceived threat (as in an old trauma that is still stored in the unconscious mind & the body) the Social/Engagement NS scans the environment to see if social interaction can neutralize or defuse the threat (even if it is just imagined). One's breathing may begin to constrict, heart rate increase, jaw/shoulders tense, & all systems go on "alert" until safety or danger are confirmed (based on current or past information).

If it does not appear to be possible to correct the situation with eye contact, smiling, talking or other social interactions, or the attempt is unsuccessful or the circumstances trigger a memory pattern from an early impressionable experience, then the Sympathetic NS kicks in and tries to fight or flight to resolve the dangerous situation. This is like the yellow light going on. Energy then collects in the major muscle groups like the arms & legs, heart rate increases more, respiration now increases, digestion decreases  & our rational thinking brain begins to go off-line, as does our Social/Engagement NS & our ability to interact calmly with other people. If we are successful in fighting off or escaping the threat then the whole system generally reverts back to a functioning green light often stronger for the experience.

However, if those actions do not resolve the situation, or it is perceived to be impossible to escape, then the Red Light of the Parasympathetic nervous system goes on signaling the person (or wild animal) to Freeze/Play Dead. This is the oldest and most primitive aspect of the autonomic nervous system and its function is to avoid or lessen the pain of death. However, it is as if one foot is still on the accelerator while the other foot is now simultaneously on the brake. So even if this resolves the threat, the stored energy needs to be released somehow to restore the system's normal set-point. If this happens, i.e. the animal shakes, trembles, defecates, vomits, yawns etc., then the animal or person can actually be stronger/quicker/smarter for having been challenged. However, most people have been conditioned NOT to discharge this energy & so it stays in the nervous system & builds pressure over time.

It is important to note that this whole process can go on at a dinner party, for example, without anyone else perceiving that there was any threat, if one is triggered by an old experience. And in order to save grace & comply with social etiquette one simply does their best to continue repressing the natural discharge responses, therefore compounding the problem over time.

Post Traumatic Stress Disorder (PTSD) results from the Autonomic Nervous System not discharging the stored energy of the experience and therefore not allowing the system to reset itself. It is also important to realize that it does not require a major incident to cause a traumatic reaction. Over time, subtle conditioning that is in conflict with a person’s deeper and authentic Self can also lead to these symptoms. So the key to the whole thing is re-storing the body & nervous system's natural ability to discharge this energy, which can even be done decades later using various Trauma Resolution Therapies, although sooner is always better when possible.