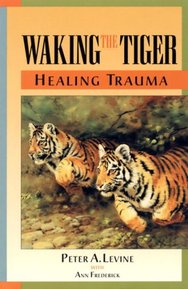 Waking the Tiger is a self-help book by Peter A. Levine which presents therapeutic advice for healing past traumas. The techniques presented in the book are based on Somatic Experiencing, the naturalistic therapy developed by Levine. The book uses metaphors from classical mythology to illustrate how one could deal with trauma without being overwhelmed by facing head-on, not the trauma, but its "reflection" in our nervous system. The book asserts that animals in the wild are persistently subject to threats yet rarely exhibit symptoms of trauma. The book's title is a symbol of returning to a more natural, energetically freer state, but also a more "natural" emotionally and intellectually freer state, being the goal of psychotherapy in general, including the particular approach developed by Levine.

Somatic Experiencing® is a body-awareness approach to trauma being taught throughout the world. It is the result of over forty years of observation, research, and hands-on development by Dr. Levine. Based upon the realization that human beings have an innate ability to overcome the effects of trauma, Somatic Experiencing has touched the lives of many thousands. SE® restores self-regulation, and returns a sense of aliveness, relaxation and wholeness to traumatized individuals who have had these precious gifts taken away. Peter has applied his work to combat veterans, rape survivors, Holocaust survivors, auto accident and post surgical trauma, chronic pain sufferers, and even to infants after suffering traumatic births.

Because human responses to potential threat vary so greatly, it is difficult to identify or classify sources of trauma. Most people associate trauma with events like war, violence, extremes of physical, emotional or sexual abuse, crippling accidents, or natural disasters. However, many ''ordinary'' or seemingly benign events can also be traumatic. For example, so-called minor automobile “whiplash'' accidents frequently lead to bewildering and debilitating physical, emotional, and psychological symptoms. Common invasive medical procedures and surgeries (particularly those performed on frightened children who are restrained while being anesthetized), can be profoundly traumatizing. Somatic Experiencing® utilizes basic tools (and “building blocks”) but also works differentially with various sources of trauma.