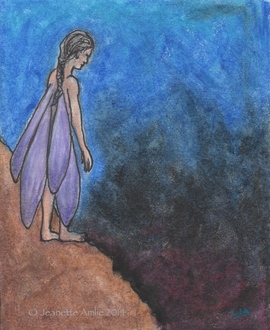 Fear of Falling © Jeanette Amlie
For a period of time I have experienced “night terror” where I wake up in a start with visceral fear permeating my entire body and mind. There is no recollection of a dream or a thought that initiated it and so I have called it “the un-named terror”. It is as if it is much bigger than me or my own life and if I didn’t have a decade of training and tools in trauma therapy and Spiritual practice it would probably be my undoing. Yet I know that it is actually a gift, despite the nebulous horror that accompanies it.

Finally one morning, after a particularly exhausting night, this image arose of a human soul with spiritual wings ready and awaiting their first attempt at flight. But s/he stands on the edge of a great abyss. This is what the night terror actually “feels” like to me….it feels identical to the fear of falling from a great height. It is not a thought or a concept, it is an automatic, physiological response to imminent death, which precedes thought.

Elizabeth Kubler-Ross identifies two forms of natural human fear: the fear of loud noises and the fear of falling. When I was reminded of this recently it clicked and I knew it was relevant to what I was experiencing. During these many months I have honed my ability to simply be with the fear and observe it without always getting lost in the experience. Finally, what I came to realize was that this night terror, experienced as a fear of falling, was a primordial ploy by the ego to keep me from plummeting into a spiritual abyss and therefore maintain the ego’s illusion of control. No longer did it feel necessary to search for the incident that caused this trauma, because I knew it was the accumulation of all traumas which instructed me to abandon the Truth that I knew inside me all along.

For whatever reasons, I am a Soul who has had numerous amazing experiences of Awakening. Some lasted only days during an intensive Zen meditation retreat and others lasted for many months and involved a dissolution of my own sense of separate self and merging with nature and other sentient beings. Yet despite all of these experiences, I have been pulled back down into my habitual doubting and fearful rejection of these profound and life changing openings. Now, after a decade of immersion in this consciously committed path of waking up to a deeper Truth, I find myself facing my own final frontier…..my fear of the abyss of my own creation.