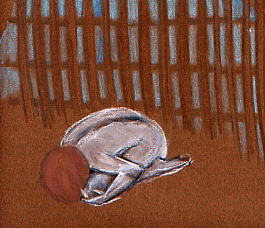 Helplessness/Freeze by Jeanette Amlie
Of all of the aspects of our human nervous system, the Parasympathetic is the oldest and most primitive. When the organism perceives it is threatened beyond its ability to escape, this old survival mechanism shuts the system down into a state of freeze.

This is much like a wild animal who, when threatened, automatically drops into a state of "playing dead", which reduces its breathing and heart-rate as well as lowers its body temperature in order to trick the predator into giving up the chase. This is evidenced in many animals including the famous antics of the opossum. Yet it is innate to all life forms down to the salamander who can attain a sort of homeostasis submerged in the mud at the bottom of a pond. And this mechanism serves animals and humans well in perserving the species despite innumerable daily threats upon its existence.

However, a problem arises with the human species development of the neo-cortex or "thinking" aspect of the brain, which can override the natural discharge process that generally follows most threatening events. For when we are conditioned by family, religion & society, to name a few, to repress these natural responses, the held energy remains in our nervous systems and bodies and accumulates over time. And in a person who has faced an extremely life threatening situation (or repeated repressive conditioning that says it is not okay to be who we are), Post Traumatic Stress Disorder can occur if this held energy has never been dealt with.

Many of the chronic symptoms and conditions that are so common today including depression, lethargy, Irritable Bowel Syndrome, helplessness, excessive insecurity......can often be traced back to this very origin. Whether it be complications at birth, challenges in school, alcoholism, abuse or simply repressing a deeper sense of who we really are, all are capable of creating chronic and potentially life threatening conditions later in life that can baffle conventional medicine and psychotherapy. Yet ironically, the very presence of this build up of old energy can often become the catalyst for great transformation when it is triggered by some life changing event.

When the parasympathetic nervous system is functioning properly, the digestive tract is effectively processing food, the heart is beating normally, the limbs have sufficient blood flow and the lungs are breathing in a full & relaxed manner. However, under extreme threat (real or perceived), it is not uncommon for the person or animal to vomit, defecate, faint or become nearly paralyzed due to contraction of the gut, lowering of the blood pressure and slowing of the heart. And shaking, crying and other signs of discharge generally follow the event. Yet often times in humans there reactions are repressed and so the energy that would have been released gets held in the body. So it is easy to see how this response could influence chronic conditions later in life that tend to have symptoms like freeze and dissociation.

The amazing thing is that wonderful strides have been made in the last decade in treating these old held patterns of energy, whether they be from Post Traumatic Stress Disorder or Chronic Repressive Conditioning. Often the primary aspect of any method of treatment lies in simply noticing the felt sensations of the body whenever this kind of reaction is triggered. This process, along with some simple bilateral techniques of stimulation, can begin to release this held energy in a myriad of ways including twitching, shaking, crying, yawning, energy streaming and peristaltic activity in the gut, to name a few. Over time this process can discharge much of the held energy and result in a great relief of many of the symptoms. And in some cases, this very process fuels the call to conscious awakening as the energy is liberated from its bound state. For more information about resources that can assist in this process please visit Treatment for Anxiety, Trauma & PTSD.