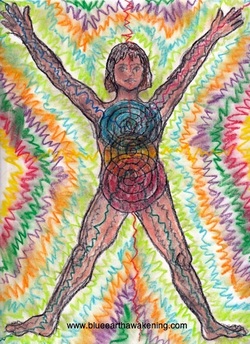 Releasing Trauma by Jeanette Amlie
So I'm sure that sitting up & writing way into the middle of the night isn't my doctor's idea of good post-op self-care, but when the revelations hit, I gotta start writing......so here goes. As I "came to" out of the anesthesia after my recent surgery for a uterine fibroid I began to notice a strange yet familiar sensation, for me that is. Starting with my legs & moving upward, I began to shake: twitches, shudders & finally full blown shaking. The nurse who was with me admitted that I had begun to do that after the operation & so they had given me demerol (which I found out later is standard if someone has "side effects" from the anesthesia).

Well Thanks Be to the Divine Universe that gave me the clarity to express the wisdom of this body by stating with bold, clear & calm words that under no circumstances was anyone to give me more demerol until the shaking was over. I told her that I have been studying trauma & the nervous system for a decade & that what was happen is sometimes called "Neurogenic Tremors" & that it was the autonomic nervous systems way to naturally shake off any of the trauma or held tension from the procedure (and I'll add here any past related trauma as well!). I assured her that I knew exactly what to do, that I could take care of it & it would end quite naturally by itself. Blessed be she just looked at me & said "OK". I then said I was fine & she didn't have to stay with me.

So when she left the room the shaking increased.... starting with my legs, then pelvis...up the spine, into the neck & last but not least.....my jaw started to shudder (my tongue & chin had been bruised in a previous procedure & I'm sure they were clearing out that old energy too!). Then just as I expected, when the "run" was over & all was basically cleared out, it simply stopped and a deep calm settled into my body. When my friend came in to see me soon after I told her what was happening (for she too has awakened the ancient wisdom of her nervous system; ) & it was like our little secret club with us both cheering my body on & praising it for it's wisdom & good work LOL!!!

Then, as I returned to the safety of her guest room I suddenly realized something huge. We had attempted this procedure a couple weeks prior & because of equipment malfunction the procedure had to be aborted. So I awoke after a month of preparation & anticipation only to find that nothing had been done for the massive bleeding I had undergone & I would have to remain on hormones to staunch the flow until we figured out what to do. Needless to say I was devastated & all I could do was curl up in a ball in the back of the car on the drive home & cry tears of helplessness. After that I descended into a deep state of despair & depression. I had no hope or desire, but only fear that something in me was so bad that it had blocked saving my life & resolving the problem. I was quite inconsolable & began to isolate (which can be a very common sign of trauma).

Not until a week later, when I was curled up helpless in bed praying for ANYTHING to help, did a thought come whistling through my head......I needed an exorcism! Now this might sound crazy to some & obvious to others, but the negative thoughts I had been mired in were unrelenting & now I could see that they did not feel like "mine". So you are free to interpret this any way you would like - spiritually, metaphysically, bio-scientifically. The crux of it was that I realized that because the medication had temporarily stopped the bleeding, I could finally do my energy-balancing exercises which I hadn't been able to do for a month & a half due to the hemorrhaging.

Because of the neuro-somatic-trauma-resolution orientation from my own training & experiences, I had already created a routine of exercises & bilateral/binaural music that I used for "somatic exorcism" so-to-say. So I plugged in the CD & started tapping, slapping, shaking & stretching out this old distorted energy. As I did this I clearly stated (very loudly I might add!) "that any & all things that were not of The Origin of this Divine Soul to LEAVE NOW! & that this Soul fully claimed & inhabited this body+heart+mind". As I continued through certain exercises designed specifically to address trauma held in the core.....low & behold I began to shake with involuntary "neurogenic tremors" that were able to release the old maladaptive energy that had been held in my nervous system since the previously unsuccessful surgery.

Now it feels important to share that it also never dawned on me that during the surgery (both times), not only did I go into an artificially induced state of unconsciousness (anesthesia), but my arms & legs were also physically strapped onto braces that made movement impossible (ie. trapped!). So, without malice or ill intent, the body for all practical purposes could only deduce that it was being tortured (regardless of pain meds or anesthesia). And any early or past-life experiences that were similar & unresolved were also likely to be triggered by the situation. And even more importantly, I never went into any kind of nervous system discharge after the first procedure until I did specific exercises designed precisely to initiate this release of frozen energy & thus liberate the organism (body & mind) from the helpless "play dead" state that it was in. Wheeeeew! So now with that off my chest maybe I can get some sleep ; }

So the moral of the story is..................we are in bodies, and those bodies have innate wisdom that MUST BE LISTENED TO in order for us to function optimally (or at all in some cases!). So if you want any more information about learning how to honor the natural impulses of your autonomic nervous system I invite you to visit the free resources in the "Anxiety Self-Help" page & watch this short video of a Polar Bear Releasing Traumatic Energy at http://youtu.be/bPFbXdSGSkc to see how neurogenic tremors work. You can also get one of David Bercelli's books that includes his simple series of "Trauma Releasing Exercises" available at http://traumaprevention.com/store/.

How awesome would it be if everyone embarking upon simple (or not so simple) medical procedures knew this about their bodies?!?!? So please spread the word!