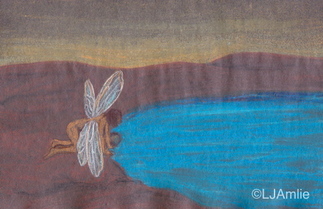 Introspection by Jeanette Amlie
Under all the layers & permutations of armor, defenses, insecurities, arrogance & contradiction I have finally discovered what for me is the "final conundrum" - the innate fear of not surviving, pitted against the frozen fear of really living.

Spiritual teachings talk about the fear of survival. But it feels far more accurate to call a spade a spade & describe it as the fear of not surviving. For me the ordinary level of biological fear of not surviving was amplified by having contracted bronchitis in the hospital & taking it home with me where it blossomed in my tiny lungs in my first days in this world. Other conditions complicated it further, but as I am led to this core "trauma" again & again I see how it set my nervous system into a pattern of contraction that extended half a century. This is not meant to say I am a helpless victim to this circumstance of this life, but rather to acknowledge that it can be useful to simply see it's relationship to the unfoldment of the decades of experience that followed.

Yet the irony is that releasing this trauma, (and thus allowing me to more directly investigate the existential belief regarding impermanence that comes with being human) led me to the second part of the conundrum. This is likely common to many people of my era who were raised by well intentioned & loving parents who complied with the mandate to send your children to public schools. I have written before about having started kindergarten at 4 years old because of a loop-hole in the system, so I won't go into that here. But needless to say, the opposing part of my existential conundrum was being immersed in a system of rules & activities that not only made no sense to me, but I was inherently incompetent to master at my early age.

So within me I have held for fifty years the conflicting impulses of being afraid of dying AND being afraid of living because I couldn't figure out how to do it right. What happens to the organism when it is exposed to such profound & fundamental contradictions is mind-blowing indeed. No wonder when I began to explore this deepest level of my subconscious terrain my body & mind erupted in debilitating panic & energetic contractions. And I'm sure there are myriad permutations of this basic formula that no doubt reside at the core of many of us.

Over the years I have acquired the ability to spelunk in these murky catacombs whenever they arise, and it has freed me up to investigate most anything I encounter. Yet it was the sincere prayer to finally & completely know the true nature of reality & who/what I really was, even if it meant that everything I thought was true turned out to be wrong, that really quickened my arrival at the "KingPin" of my quandary. In the end I suspect we will all find that our core dilemma revolves around some version of our conditioned mind's fear of impermanence & the unpredictability of life in a body.

So I encourage you to keep turning inward & investigating the seismic tremors of your own seemingly imprisoned consciousness. For underneath it all is always the vastness & spaciousness of the indefinable. As I relax into this awareness I have noticed what I can only describe as a tendency to begin to "pixelate". It's as if the core of my identity is slowly beginning to "decompile" bit by bit & simply float into the space around "ME"...... and for once it really feels okay for me to disappear completely. This isn't a death-wish by any means, it is simply a de-centralization of who I have believed mySelf to be. Where it goes........I really don't know, and for once it feels totally okay NOT to know the answer ; )