Addicted to Discharge
by Jeanette Amlie 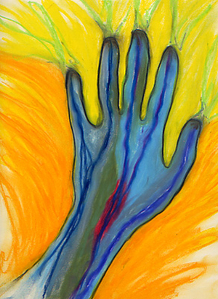 Energetic Discharge by Jeanette Amlie
It took nearly half a century for me to really grok that I seemed to carry an inordinate amount of energy in my body & mind compared to other people. Certainly I noticed the symptoms at an early age, and so did my family. Yet there didn't really seem to be anything to do about it when I was young other than try to dim down the ways this energy got expressed. And so the cycles of subtle or blatant repression followed by dramatic bouts of venting began.

Over the ensuring decades I learned many acceptable ways to cope with the build-up of this energy including dance, aerobics & physical exercise. But mostly I learned better ways to keep the lid on the pressure cooker & conform to societal standards, which over time leads to a myriad of neuroses. Of course my life was peppered liberally with unavoidable emotional outbursts that always felt extremely cathartic and released just enough pressure to keep the lid from blowing. And so the cycles continued on.

Not until the death of my mother a few decades later did the first signs of the lid really blowing show themselves. This reflects what many people experience where we learn coping skills that work marginally well until some form of crisis cracks the armor of these defenses & compromises their ability to hold us in check. What happened then was the beginning of a new path of exploring these built up energies & trying to find more effective ways of expressing them and fixing all the ways I was broken. Thus began the era of bleeding the pressure release valve on this human pressure cooker, in more ways than I can possibly convey.

Verbal Discharge
Not surprisingly it began with talk therapy. Somehow psychotherapy has convinced us that by talking about our problems and our distorted views over and over again that they will change. And I will admit that it really felt good to "get it off my chest" with someone who really seemed to care and have the skills to help me gain insight on so many outmoded beliefs I had developed. And you can be sure my friends & family were relieved that I had someone else to talk to about this unrelenting need to fix my broken self. I will be forever grateful to the kind souls who sincerely listened to me and offered their support during a time when it was, I was, too much for most people.

Yet as I learned decades later when I was on the other side of the couch compassionately listening to the woes of my clients, that the stories just kept repeating and repeating themselves. Yes insight was often gained, but somehow it rarely seemed to even touch the thoughts, feelings and behaviors that resulted from these old contorted views of ourselves and the world around us. And so I basically went back to my primary coping skill of discipline, which I had blessedly learned from my father & the public school system at an early age.

Emotional Discharge
Then one day years later, quite out of the blue, I was hit with unfathomable levels of panic and anxiety. I have written about this before in "Nervous Breakthrough: The Art of Transformation", so I will not go into detail here, but suffice it to say that one can only imagine that one is dying when this happens....or that one desperately wants to! And so the years of attempting to deal with decades of repressed emotions began. Fortunately, I was able to traverse this rocky path with minimal pharmaceutical interventions and no hospital or psych wards. Yet these are most often the only apparent options for so many beings who experience similar states of breakdown.

It is also important to note that when one is experiencing this extreme state, talking about it in an attempt to gain insight is often quite useless, as is resorting to discipline. None of this seems to touch the seeming flood of emotional energy that has broken through the dam & threatens life itself. So often we are simply swept up in it, flailing to grasp onto anything that may ofter a modicum of control. It is also at this time that the war raging inside us between our conflicting core beliefs that we have adopted becomes most evident. Yet we will soon find ourselves in an endless whirlpool of torment if we believe that by expressing & catharting these emotions over and over again we will find and abate the headwaters of this torrential flow. So what then can be done to temper this unceasing flow of emotional energy?

Physical Discharge
For me the answer to this question came by turning towards the body itself. I began an intensive immersion in a Korean form of Yoga/Chi Gong called Dahn Hak. This was the most amazing and effective system I had ever experienced of repetitive exercises that stimulated the body and nervous system in ways that encouraged it to begin to open up channels of energy discharge. And for years this was the main way that I managed a body that seemed like a 110 appliance that was plugged into a 220 outlet.

As this process continued to unfold with increasing intensity, I sought more radical interventions & before long sent myself to an intensive workshop at Esalen Institute on Spiritual Healing & the Lightbody, which was offered by a Brazilian healer. During this amazing workshop the energy opened up in my pelvis & the flood of emotions began to express themselves in involuntary twitches & gyrations, which were absolutely fascinating to witness, if not a little bit scary. Little did I know that these would soon develop into cyclical convulsions in my solar plexus that lasted up to an hour at a time multiple times a day for the next 6 months. Eventually the intensity of my somatic reactivity would offer me the opportunity to leave the counseling program I was in & enter a school to study energetic bodywork, once again with the ulterior motive of finding some way to fix this bodymind that was spiraling out of control.

Mental Discharge
The next avenue of exploration in my attempt to seek a resolution to this quandry that seemed to be my life was through metaphysical teachings & experiences. I had discovered during other phases of this journey my proclivity for experiencing wondrous mystical phenomena like merging with trees, receiving profound visions, speaking in unknown tongues and hearing divine guidance from clouds. These were amazing & scary at the same time, for it fueled my pre-existing belief that I was beyond broken as well as seeding the notion that I was somehow special.

During these multi-dimensional adventures I found that the fantastical imagination that I had been taught to repress early in life could soar free & uninhibited. My mind seemed to know no boundaries & the high I experienced participating in "collective dreaming" light-groups was beyond anything I had felt before. I could finally utilize these gifts to help mend earthgrids, create parallel universes and serve the collective spiritual ascension of the human species. After these sessions, which were indeed quite "mind-blowing", I often would be clueless as to how to step out into the 3D world again and found the need to eat meat or plunge my feet into a cold mountain stream to "get back into my body". And as glorious as these experiences were, my life quickly began to fall apart on the mundane plane of existence. I also began to notice, during one metaphysical hiatus while staying with my sister, that I missed these experiences like someone must miss doing crack. Ordinary life felt bleak in comparison and I had lost my previous ability to simply force myself with discipline to deal with myself and the circumstances of my life.

Stopping "Cold Turkey"
I am chagrin to admit that not until my life had continued to spiral downward and I was faced with being without money, home or car did my prayers turn from trying to manifest a miraculous escape to just wanting finally to know the truth, even if it proved everything else to be a delusion. It was then that a singular voice broke through and pierced the final layer of protection around my exhausted body, emotions and mind. It came as the invitation to just "stop" everything......in the quiet voice of Gangaji. And it came to me right where I lived with no bells or whistles or intensive workshops or impressive dramatic experiences. It came as an exquisitely short You-tube video inviting me to stop. (check it out at http://youtu.be/GdzPp9cRKN0).

And in that moment I realized that I was ready to finally call off the search. I was so exhausted by my years of desperately seeking a solution to the irresolvable conundrum of my life that I was really ready to just stop. And in that moment I touched something that eluded me during most of the profound experiences of the last decade. In that moment I found something akin to peace, something more spacious and unbroken. Now the real gift in this offering was that Gangaji had said that I could go right back to my previous activities, which was just what I needed for my mind to abdicate a moment of control.

Now I'm not saying that what I experienced was enlightenment or even the profound and dramatic episodes of "satori" or sudden awakening that I had known before. It was much quieter than that. But I knew it was something I could invite into my life regardless of how attached I was to other areas of control....and so I did. And these little moments of pressing the "pause button" on analyzing, planning, scheming, understanding, remembering and even dreaming started to give a little space to the possibility that there really wasn't anything to fix.

Life Living Itself
And after a few short months of interspersing these temporal pauses with what my mind now likes to call "somatic-self inquiry", my life is quietly changing itself. Now, for one who has a personal "herstory" of a nervous system locked into a kind of hyper-vigilant "just-try-harder" mode, this is truly a miracle of untold proportions. And so I dance in the unfolding of this wonderful mystery called life & invite you to dive head first into it too!