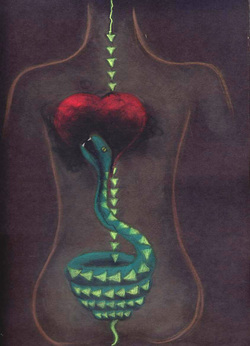 Inner Healer by LJAmlie
What happens if you have symptoms of trauma, but never had a “big” incident that caused a traumatic reaction? We all have been shaped by big or little traumas, what I call capital “T” or little “t”. The big “T” Traumas are easy to identify like an accident or the death of a loved one or the end of an important relationship. If they are one-time incidents they can often be effectively treated by what are now fairly accepted trauma release therapies like Somatic Experiencing, EMDR (Eye Movement Desensitization Reprocessing) or a spin-off of this called Brain Spotting. The last two techniques both use alternate stimulation of the opposite hemispheres of the brain to release and re-set the brain to a more natural state.

But what if you haven’t had any notable big "T" Traumas to point your finger at but you still have trauma-like symptoms, like insomnia, heightened startle response, intestinal issues or unpredictable emotional outbursts (anger or tears) to name just a few? This may be a sign of what is referred to as c-PTSD or Complex Post Traumatic Disorder. It may also be what Bessel van der Kolk is identifying as DTD - Developmental Trauma Disorder.

This can result in what I refer to as chronic, non-specific illnesses and relational difficulties that can reach a crescendo sometime in the middle of our lives. This is because subtle, chronic forms of neglect and inadequate care influence our developing beliefs about ourselves and other people and because so much of the experiences happened before we developed language, they are difficult to address with conventional "Talk Therapy".  Unfortunately conventional medicine is often only able to treat the symptoms, which generally just suppresses them until they crop up in another way.

Well this is when the little “t” experiences or conditioning comes into play. As James Hollis presents in his book The Middle Passage, “The Middle Passage begins as a kind of tectonic pressure which builds from below. Like the plates of the Earth, which shift, rub against each other and accrue pressure that erupts as earthquakes, so the planes of the personality collide. The acquired sense of self, with its assembled perceptions and complexes…begins to grate and grind against the greater Self which seeks its own realization…While some come to this fated meeting with themselves through a catastrophic event, all suffer warnings long before. The ground beneath one’s feet trembles ever so slightly, and it is easy to ignore, at first…”

This is when we can begin a journey of self-discovery with the body and the nervous system as our main guides. The process can take longer than treating Trauma from a single incident, but the results can be even more life transforming. By utilizing somatic awareness processes, simple bilateral exercises and techniques modified from standard trauma resolution therapies we can begin to de-condition the body and nervous system of the old beliefs that have been stored in it either consciously or unconsciously. We don’t necessarily even have to know what the original experiences were, especially since many are often pre-verbal. But we need to begin by turning our awareness gently inward to our felt experience and the ways we have habitually contracted our energy within our core. This can be challenging at first as we realize how long we have distracted ourselves from this awkward, inner discomfort or have been overwhelmed by it. Yet in time, we can begin to regain the natural capacity for the organism to release the held tension and find a greater level of peace in our tissues and mind than ever before.

Once a client called me all excited to say she had broken a tooth and while she sat waiting in the dentist’s office she started feeling her toes tingle and she knew she was already releasing the traumatic energy of the experience. Our bodies begin to remember how to do what wild animals do all the time. If a deer held onto all the “fight or flight” energy of every time it sensed a predator or was chased, it too would end up with Post Traumatic Stress Disorder!

So the main key is to notice when our bodies are giving us signs of distress. A typical example is that we react disproportionately to an irritating situation. First we need to interrupt the pattern by some beneficial means. Then we need to allow the energy to begin to flow and release in a way that is not overwhelming or re-traumatizing. Finally, we need to input a more positive response using resources that we have intentionally cultivated. When we begin to do this repeatedly, the patterns start to change. This then makes it far easier to explore the "causes" of our fears and old beliefs without the excessive emotional reactivity that they have held in the past. In time, we can learn to watch our Soulma (Soul+Soma) for signs that something is "up" and go into it right away and find the "node of beliefs" that perpetuate the reactivity. This allows us to move into a higher state of connection with out Source/Self on a daily basis and assists any and all other growth processes or practices that we are already doing. For some people, even heightened states of awareness and insight about our conditioning and beliefs doesn't let the nervous system know that it can quit holding the energetic residue of the experience, but by adding somatic based processes we can liberate the body in order to ultimately free the mind!